How one top-tier U.S. automotive manufacturer transformed its material transport systems and processes in a few short months

In 2018, with automotive margins continuing to tighten, skilled operators proving difficult to find and injuries on the rise, a major U.S. automotive manufacturer decided it needed to move away from forklifts. They were looking for a safer, more efficient solution for transporting engines and other materials from assembly to testing within their 40,000 sq-ft facility. Key for them was reducing how often employees had to manually lift and move heavy engines, while reducing the risk of injuries caused by forklifts.

According to the National Safety Council, in 2018, forklifts caused 85 work-related deaths and 7,940 nonfatal injuries, leading to an average of 12 days away from work. Consequently, a fork-free safety initiative across the manufacturer’s global organization prompted a switch from forklifts to manually driven tow tractors with automatic trailers.

Unfortunately, while safer than forklifts, this approach raised new safety and labor issues. For example, with these manual tow tractors, high-value employees were tied to a low-value transportation task. To maintain operational efficiency, human drivers were tasked with tugging more trailers in a single trip than they could safely maneuver in a dynamic and challenging manufacturing environment.

The manufacturer sought an alternative and uncovered an automated approach that addressed both safety and labor concerns: autonomous mobile robot (AMR) tuggers. As the manufacturer quickly experienced, automating its material transportation with these AMR tuggers not only freed team members for higher-value work, they also lowered overall costs. With a rapid deployment, they increased efficiencies; improved overall safety; and effectively managed the often-changing nature of automotive manufacturing and lean principles.

Until recently, traditional automated guided vehicles (AGVs) were the only option for automating internal material transportation. AGVs move materials using fixed routes that are guided by permanent wires, magnetic strips or sensors embedded in the plant floor; all of which require expensive, inflexible and disruptive changes to a facility’s infrastructure. AMRs, on the other hand, move independently, eliminating the need for these expensive, time-consuming infrastructure changes.

The ability to have the AMR tuggers up and running so rapidly, without infrastructure changes, meant lower start-up costs and a faster return on investment (approximately 12 months for AMRs, as compared to labor costs, and 22 months on the total project). The manufacturer was immediately able to start increasing efficiencies while reassigning two team members in each of two shifts.

In one trip, a single AMR tugger can carry what it typically takes six manned forklift trips to transport; this substantially adds up over the course of a typical day. In addition, AMRs with trailers integrate with manufacturing conveyors and other factory systems. When inventory on a conveyor reaches a predefined level, sensors alert the fleet control software system to dispatch an AMR tugger to refill the supply. Once the AMR arrives at the consumption point, the software notifies the automatic trailers to deliver materials to the conveyor and load empty containers back onto the trailers via their own powered conveyor system. Once the exchange is complete, the software dispatches the vehicle back to the pickup point. Automatic trailers and conveyors exchange empty containers for full containers, and the AMR is sent to a charging location where it waits for the next low-parts signal.

Long trailers, narrow pathways and visibility issues for drivers can result in significant injury risks for employees. In addition, dull and repetitive tasks can lead to distraction and fatigue. Advanced automation — specifically the deployment of these AMR tuggers—reduced the frequency and impact of these incidents. Heavy payload AMR tuggers enabled more materials to be pulled in shorter trains in the same amount of time as manually driven tow tractors with trailers. This increased safety and productivity and eliminated the visibility risks associated with forklifts, where the load blocks the
driver’s view.

The manufacturer’s material transport path was only 18ft wide, with heavy foot traffic, and manual vehicles and carts limiting passing room. To offset the associated risks, the AMR tuggers have vertical-load sensors, which sense obstructions for the full height of the load in front and to the sides of the vehicle. This allows an AMR to safely operate in congested spaces and maneuver around other traffic—while still optimizing the AMR’s flexibility and speed.

In addition, AMR tuggers include software that integrates with multiple external devices, such as traffic lights and emergency response systems, so workers in the area are constantly aware of the vehicles’ movement.

Due to the often-changing nature of automotive manufacturing and lean principles, AMR tuggers and associated fleet control software need to be flexible and easily modifiable to adapt to changes in plant layouts and processes over the AMRs’ lifecycle. Choosing an AMR tugger with a base platform that can be modified and transformed into other high-payload autonomous vehicles, like pallet stackers, helped this manufacturer reach the safety, labor and cost goals associated with its fork-free safety initiative.

The productivity and safety benefits realized after automating this specific material transportation task have been significant within this one location and prompted this automotive manufacturer to deploy these flexible and modular AMR tuggers for other applications within this facility and beyond. The ability to quickly deploy shorter, safer autonomous tuggers within existing environments—all without infrastructure modifications or a loss of productivity—has resulted in a fast ROI and the ability to reassign four workers to higher value tasks. As they continue to deploy AMRs to automate other tasks, these benefits will only compound. WMHS

Rob Sullivan is President and CEO of AutoGuide Mobile Robots, a designer, developer and manufacturer of high-payload industrial AMR solutions for assembly, manufacturing, warehousing and distribution operations across multiple industries.

CoreTex Q&A Spring is here, which means hot weather and, unfortunately, the potential for bug bites and sunburn. This month we chat with CoreTex Products about its line of skin protection products specifically formulated to […]

Paul Mihelich, Vice President of Sales and Marketing at Wildeck Warehouses and distribution centers across the country are seeing a dramatic increase in the amount of product flowing through their facilities. Due in large part […]

About the Fair: This fall, the A+A International Trade Fair will be taking place November 5-8th at the Düsseldorf Fairgrounds in Germany. At the 2017 conference, exhibitors flaunted the latest trends in the fields of […] 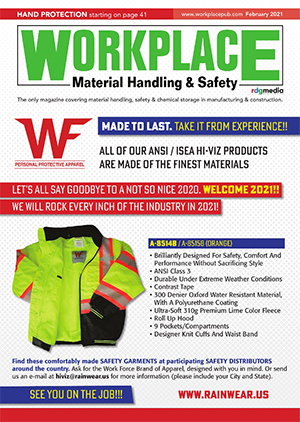