SUMMERVILLE, S.C. — On Monday, KION North America employees celebrated the start of production for two of its newest forklifts. Assembled at the company’s South Carolina facility, the Linde Series 1347 and Linde Series 1319 were initially announced at ProMat in April—the largest expo for manufacturing and supply chain professionals in North America held biannually in Chicago.

In preparation of these new products, KION North America has spent the past two years reconfiguring their production lines and completing facility upgrades to boost its production capacity. Their goal is to increase capacity to 12,000 lift trucks a year by 2020, up from about 3,000 in 2015.

“After months of reconstruction and reorganization, I’m proud of our team and their dedication to get us here,” said Daniel Schlegel, vice president of operations at KION North America. “We’re excited to increase our manufacturing footprint in South Carolina with two new excellent Linde products.”

The research, development and engineering of the new lift trucks is the result of three years of collaboration between a global project team comprised of members from the United States, China and Germany.

The team was able to design two of the most stable trucks in the industry while maintaining the compact nature of Class I and Class IV equipment. Each offered in four models, the Linde Series 1347 is an electric-powered counterbalanced sit-down truck whereas the Linde Series 1319 is an LP-powered torque converter forklift.

Both trucks feature a unique mast rail configuration that permits high residual capacity without compromising the high level of visibility Linde’s are known for. Their capacities ranges from 5,000 to 6,500 pounds with the truck being best suited for primarily indoor environments including general warehousing, trucking, distribution and manufacturing applications.

“Successfully bringing these trucks to market  has been a day I’ve looked forward to for so long, it’s hard to believe that day is today,” said Vincent Halma, president and CEO of KION North America. “From conceptualization and production to now sales and delivery, I could not be more proud to celebrate this milestone with our team.”

Lock in 2017 pricing by registering before January 1st. As a leading authority on machine safeguarding, Rockford Systems, LLC returns in 2018 with a comprehensive seminar ...
Read More → 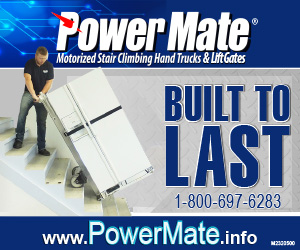