Michael C. Liptak, Co-Founder of ALL, Dies at 91 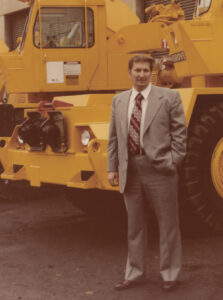 The principal architect of the heavy lift equipment rental category and driving force behind The ALL Family of Companies has passed away. Michael C. Liptak was 91. Together with his wife, Marvine, and brothers Lawrence and Jake, Michael founded ALL Erection & Crane Rental in Cleveland, Ohio, with just a single crane in 1964. Through the decades, it grew into the largest privately held crane rental company in North America, boasting 33 branches across the continent, a fleet of more than 3,500 cranes, and an employee roster totaling more than 1,500.

At the time of ALL’s founding, most contractors had to purchase and maintain their own cranes. Michael and his inner circle saw a customer need, bought their own crane, and began renting it. In the process, they created a new category—crane rental—and backed it with hard work, reliable products, and outstanding customer service. In doing so, they laid the foundation for a company that would stand the test of time.

Michael C. Liptak was a blue-collar guy from a blue-collar city, and he built his business through sweat, time, and a handshake that was his bond. In the world Mike and his brothers grew up in, nothing came easy, but he wanted to make life a little easier for the working people who relied on heavy lift equipment to do their jobs—because he was one of them.

Up until his final days, Mike was still involved in daily life at ALL, visiting branches and offering his advice and expertise. He was well known to weigh in on critical—or even seemingly mundane—business issues, because even if he had handed off the mantle of responsibility, he never stopped carrying the weight of his life work. He pushed those around him to be the best they could be. And he could be that type of leader because there wasn’t a thing he hadn’t done.

Known to many as Big Mike, he never stopped being excited about the basics of the business, perhaps best characterized by the kid-like way he felt compelled to go out and operate any new crane the company had acquired. You can’t keep an operator out of the seat, and Mike was an operator at heart.

Michael C. Liptak was preceded in death by his brother Jake, who died last year.

Peapod Digital Labs, Ahold Delhaize USA’s digital and e-commerce engine, announced it is working with Swisslog to pilot micro-fulfillment technology with The GIANT Company in the ...
Read More →

Colson Group, a leading global caster and wheel company, announced that it has completed the asset acquisition of Vulcan Industries, Inc. “With complementing products and customer ...
Read More →

It’s the Black Friday of safety education deals, but the opportunity for occupational safety and health professionals to secure the best deal for SafetyFOCUS 2022 expires ...
Read More →
Leaders in Material Handling