The Matter Of Safety In The History Of The Construction Industry 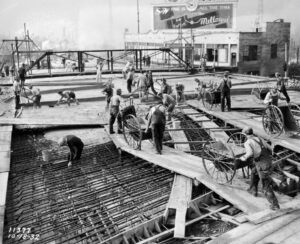 The construction industry is one of the oldest activities created by human beings. It started at the beginning of mankind thousands of years ago when we developed the ability to reason: the cognitive ability to draw a conclusion based on the experience or use of tools or other available material. With such new brainpower, the conscious early man reasoned that rocks could be transformed and used as a tool and thus built the first condominiums, then called caves.

Safety has advanced from being a low priority to a primary concern. The Federal Occupational Safety and Health Act was not signed into law until 1970 and many contractors considered some rules just a burdensome cost increase. Prior to OSHA, construction companies and employees were on their own regarding the importance and practice of safety. Today, successful companies don’t treat their safety representative as a detective who exposes dangerous conditions and scolds workers. Instead, the position is high on the organization chart because of the respect they have earned and the realization that safety is about affecting human behavior in the wise (safe) or unwise (dangerous) decisions that are made.

Joe Egan is President of Egan Connection Inc., a construction consulting, coaching, and training company, and also President of Egan Publications Inc. for the authorship and publication of his three books: (1)The General Contractor – How to be a Great Success or Failure (2) Construction Project Management – How the Great Ones do it and (3) Building Positive Character – 50 Tips on Empowerment, Overcoming and Success. Egan is also an adjunct professor at Minnesota State University School of Construction Management.

Lock in 2017 pricing by registering before January 1st. As a leading authority on machine safeguarding, Rockford Systems, LLC returns in 2018 with a comprehensive seminar ...
Read More →

Creating Eye Wellness Both on and off the Screen

By Shelby Jenuwine, Contributor Eye injuries in the workplace are fearfully prevalent. The National Institute for Occupational Safety and Health (NIOSH) reports that every day, nearly ...
Read More →
Leaders in Material Handling